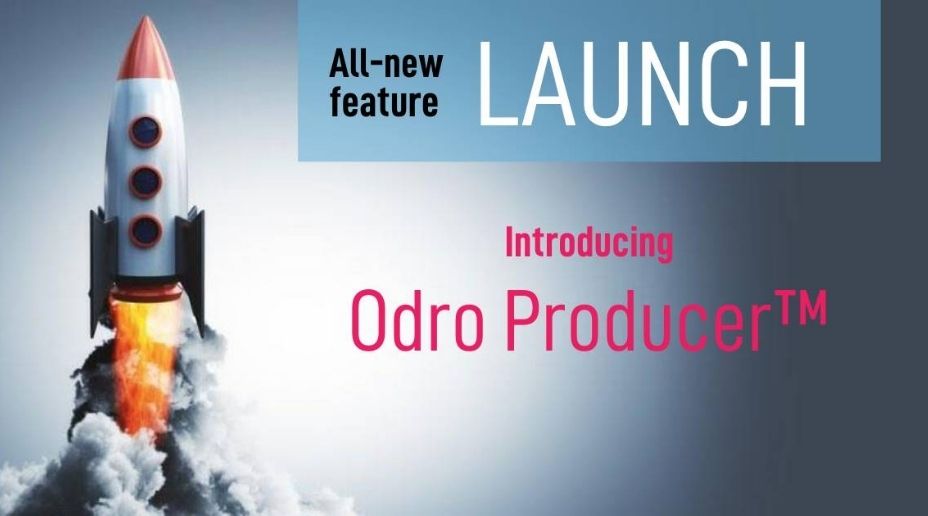 Video software specialist Odro has released a new feature this week which gives recruiters the power to create their own professionally edited, visually engaging content, in a matter of minutes. Producer™, which is available exclusively to Odro customers, sits alongside the company’s hugely successful HD video messaging feature, Capture™, to provide recruiters with a world-class solution to business development and marketing, in one solution.

Already the UK’s leading supplier of video interviewing and engagement software to the recruitment industry, with this latest release, Odro has cemented its position as the world’s only complete video solution for agency recruiters.

Producer™ was developed to empower agencies and consultants with their very own video content creation and editing suite. With Producer™ at their fingertips, consultants can create eye-catching, professionally edited video content quickly and easily, ready to share in a matter of minutes. Whether that’s video job ads to boost candidate attraction, compelling video content for LinkedIn, or even to market hot candidates in a new, more effective way, Producer™ helps recruiters take their video content to a whole new level.

As with all things Odro, Producer™ has been designed to be slick and easy to use and offers users a wealth of choice and flexibility. Accessed from the Odro dashboard, video content can be recorded directly from within Producer, on either desktop or mobile. Videos can also be uploaded into Producer™ or exported from elsewhere in the Odro platform. There are no restrictions.

Then comes the fun part. Once recorded, following an intuitive, step by step process, producers can add intros, outros, banners, overlays, logos, images and more to videos quickly and easily. Templates can be saved within the platform too - with logos, branding and anything else needed incorporated – for ease, speed and continuity. Featuring the latest AI, subtitling is super-fast and easy too. Producer™ will predict the content with a high level of accuracy and allows for on-screen updates and editing in a matter of seconds.

Once the video creation is complete, it’s time to get the message out there. And with Producer™ that couldn’t be simpler either. With LinkedIn integration, videos can be posted from the platform directly to your feed. Alternatively, the video link can be copied and added to your CRM system for en masse mailing, pasted into an email or even embedded onto your website. Of course, it can be downloaded if you prefer too. Whatever works best for your workflow, Producer™ has all bases covered.

Since its launch, thousands of existing Odro users have already been trained on Producer™ and the Odro team are hard at work activating this much sought-after enhancement which has been in high demand. For new customers joining Odro, Producer™ is now a core part of the platform and will be available from go-live.

CEO Ryan McCabe said: “When we started out Odro was a virtual video interviewing solution. Our focus was on helping recruiters to reduce the time to hire and provide a better service offering to their clients and candidates. Next we decided to develop a sales messaging tool, Capture, which has proven to drastically improve engagement and response rates. Producer now completes the tool kit. Now, it’s more important than ever to engage with your audience in the most impactful way. Producer helps our customers do exactly that. The response so far has been fantastic. It’s definitely an exciting time for video!”