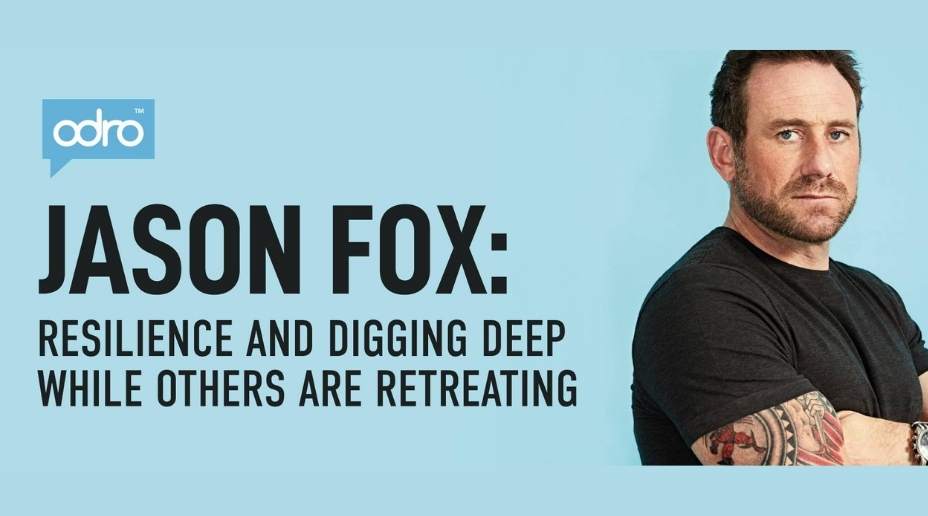 It’s 14th May 2020, we’re on our 9th week of running the Odro operations from the safety of our own homes, and today is a special day. Our CEO, Ryan McCabe, has organised a treat for us, and it’s a goodie! We’re being joined on video call by former Royal Marine Commando, Special Forces Sergeant, and television personality, Jason Fox.

What Does the Fox Say?

Couldn’t resist a reference to that old chart-topper, cause frankly, when else would we ever get the chance?! Jason ‘Foxy’ Fox, is known for being one of the most hardened instructors on Channel 4’s hit show ‘SAS: Who Dares Wins’, and has previously spoken out about his struggles with PTSD and depression. But he’s not here to shout at us or make us jump into freezing cold water, at least not today. Jason is here to talk to us about resilience and digging deep while others are retreating. A topic we can all relate to in the current crisis and what we have been striving to do as a business from the get-go.

Once we had made fun of Client Engagement Manager Sam’s newly bald head, our founder Bill had revealed he’d never watched ‘SAS: Who Dares Wins’, and CEO Ryan had warned the girl not to ask for Jason’s phone number, the man himself arrived online and we kicked off; although not before he also made fun of Sam’s lockdown baldy.

Jason started things off by sharing a particularly harrowing story about his time serving in the SAS when he had demonstrated undeniable bravery, not that he called it that, of course. We were totally gripped at the point in the story when he rightly pointed out “there’s more strength in a team, you’re all in it together”. In fact, the pearly whites of Team Odro lit up our individual little thumbnails because if there’s one thing we already knew, it was that.

Jason then went on to discuss how in a crisis the circumstances are always changing, but that it’s not just about adapting, it’s about debriefing afterwards too. In the SAS, the ‘Hot Debrief’ immediately after a distressing and life-changing event is what strengthens the team going forward, and not just the current team, but those in training and those future members down the line too, as the findings and learnings are implemented into training. I’m sure we’re all guilty of not paying enough attention to this at points when we’re snowed under and feel like we don’t have the time.

He spoke of it not being a ‘witch hunt’ to find out who maybe made a mistake or made the wrong call, but rather a discussion of lessons learned to inform improvements going forward to ensure onboarding is as “bomb-proof” as it can be. With our current environment constantly changing, this is something we can definitely put into practice.

There were lessons to be taken from the planning of a mission too. First off it’s about setting out the objective. He went on to describe the in-depth level of planning that follows this. Which is not always a privilege we have but is obviously a fundamental and crucial part of the military’s operations. He talked about breaking things down into bite-sized chunks to make them more manageable and about taking each step at a time. He then reiterated that the objective was always at the forefront of the mission and that it was even literally spoken aloud, clearly and authoritatively by the commander in charge not once, but twice, back to back, to emphasise the point. I think we can all agree that we’re guilty of losing sight of that at times, albeit not a luxury he and his fellow commandos have.

Dealing with a Crisis

One of the most relatable moments came when Foxy was talking about how he deals with a crisis. It was great to hear that even people like him, even when right smack bang in the middle of a situation that we could barely fathom, have moments of doubt. Moments when futility and hopelessness take over. He even talked about imposter syndrome. His solution? Embrace these feelings, let them in and give them their space. Then flip them on their head. He talked about how being mindful, learning to take confidence from yourself and to tune into the fact that you are exactly the right person for the job at hand, can quickly put these feelings at bay. And let’s face it, we typically have a lot more time to deliberate than he does so if he can, surely we can too.

Probably the moment when Foxy was most at home was when he was talking about the importance of culture and what a big part it plays in the team dynamic. The Royal Marines embody a lot of values but Foxy touched on the four that were most important to him: courage, determination, breeding unselfishness and cheerfulness in the face of adversity. Side note: I think we all know Ryan McCabe is ordering a poster with this mantra for the office as we speak!

He talked about ‘having each others’ back’ at which point team Odro nodded along as it’s one of our very own values. But also because of how he went on to explain this – while you’re always thinking of and prioritising others over yourself, remember too that they are doing the same for you. Which means you don’t have to worry about you, ‘cause you’re their them. What an amazingly straight-forward but totally on-point way to put it. Man’s a legend!

We all logged off feeling extremely impressed with Jason and wanting to be a bit more like him. From the conversations after, something that was ringing in everyone’s ears was his comments about ‘picturing yourself completing’. Whatever you’re tackling and whatever adversity comes your way, set yourself a goal and, even when the going gets tough, picture yourself completing it. There will be times when you feel emotional and that’s okay. Don’t shy away from these feelings or give up when the chips are down cause it’s too hard; meet your challenges head-on, and work to overcome.

Safe to say, we could all be a little more Foxy.