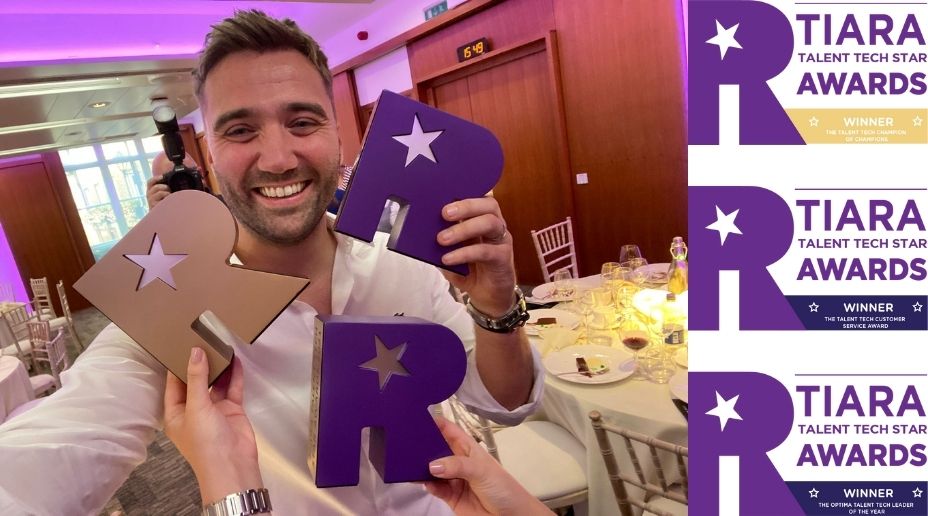 Although Odro CEO Ryan McCabe complained about the 4.30am alarm clock after his army of young kids had refused to sleep, the trip from Glasgow to London was worth it. Ryan, along with Paul Lucherini, Meghan Logue and Megan Trueman from Odro’s Customer Success team, were headed to the Tiara Tech Talent Star Awards. The first in-person event for the industry since early 2020!

Odro were nominated in 4 categories. Since finding out we were finalists earlier in the summer all the shortlisted entries were reviewed by an independent panel of judges who went on to determine the winners.

Team Odro enjoyed a three course meal and some drinks at The King's Fund in Cavendish Square before the prize giving ceremony began. Having swept up the Innovation Award at the virtual ceremony in 2020, the team were feeling optimistic about taking home some silverware for the trophy cabinet this year. But little did they know they’d be heading back up to Glasgow with their hands full!

First up Paul, Director of Customer Success at Odro, collected the much coveted Customer Service Award. Judges praised Odro for showing clear and demonstrable innovation with its Zoom and Teams integration and its impressive Capture product, delivering the best service to clients with strong testimonials that has driven excellent growth. Paul thanked his team for their hard work and dedication to keeping Odro a customer centric business.

When it came to Tech Leader of the Year the Judges said that Odro is a super smart business with a positive culture and a genuine sense of innovation led by an impressive leader. They went on to praise Ryan saying, “He knows how to attract and retain good people and keep them striving for greater things. Ryan has managed the challenge of maintaining culture and staying true to core values while scaling organically.” A modest Ryan gushed about how he could never do it without the team around him.

Odro lost out to worthy winners Mercury xRM in the innovation category. While fellow Scots, Firefish, picked up Best Place to Work. Hats off to both. Seems like Glasgow is the place to be for RecTech!

Lastly was the biggie. Champion of Champions! AND THE WINNER IS… ODRO! The judges said - “It has been a great year for Odro, with big client wins including Hays and a £5m growth investment from BGF. Winner of this year's Customer Service and Leader of the Year awards, Odro has demonstrated excellence, leadership and growth to make it a worthy Champion of Champions for 2021.” The team celebrated with prosecco as the final award was the icing on the cake for a great year and a brilliant boost after a very strange 18 months!

News of our wins (and some celebratory selfies) made it to the Odro slack channel and everyone raised their Friday happy hour to a brilliant team effort. Ryan, Paul, Meghan and Megan said that even without the wins it would have been a brilliant day catching up with others in the industry. Big smiles on the train home, the 4.30am rise well and truly forgotten!